A catalytic converter is a part that controls the emission via the car’s exhaust. It activates the gas that the motor vehicle emits as well as making it less harmful to the surrounding when released.

A clogged catalytic converter can result in bad gas mileage and reduce the engine’s performance levels in your truck. Also, a clogged converter finds it hard to control the harmful emissions the car’s exhaust emits into the environment.

How To Know That The Catalytic Converter Is Clogged?

You are not in the position to inspect the catalytic converter; hence, there is no way you can see the inside of it that allows you to realize if it is really clogged or not. It is very important to get to know if your catalytic converter is clogged.

In most cases, if it fails to work and starts to show some symptoms. However, it is okay if you take a look at it every time you take your car for servicing.

If your truck misfires, it always overheats the exhaust system. If the fuel mixture is rich, it can produce misfire and end up overheating the exhaust that will cause your catalytic converter to start melting and end up clogged.

Your vehicle’s performance and functionality will go down and its one of the signs of a clogged converter. You﻿r truck will reduce in speed. Poor exhaust valves on your engine can as well cause the clog.

To fix your clogged converter without taking it to the shop, take a look at these simple and quick steps.

How To Unclog A Clogged Catalytic Converter?

The only method to be sure that your catalytic converter is clogged is by opening it up and taking a look at it, which is illegal. There is no “for the time being” solution. However, you can try some of these methods to unclog it.

Method #1: Take Your Car To The Highway

Drive your truck on a highway and drive it at a speed limit for one to two miles. Look at your side mirror and search for a place where you can reduce speed quickly.

Push down your breaks and repeat the whole process considering the safety precaution. If you notice performance improvements on your car, the catalytic converter has been unclogged.

Method #2: Take Your Car To A Professional Mechanic

If you realize your catalytic converter is clogged, it is recommended you take it to an expert mechanic. Tell your mechanic to open and dismantle it by opening it up.

If the ceramic material in the converter is melted out, you have to change it. The mechanic will perfectly unclog your converter and advice you accordingly. However, if you feel you are capable of doing it yourself, you can follow method #3 below.

Method #3: Doing It Yourself

To unclog the clogged catalytic converter, you should be aware of what you are doing before doing it. However, it is advisable you take the truck to the nearest mechanic to be inspected out and worked on it.

Before you start unclogging it yourself, you should know that you can get fined which is much higher than the normal fines.

You need the following things before starting your process:

Here are the steps to follow while unclogging the catalytic converter:

Before starting your process, make sure your car is parked on a flat, hard, well-lit surface. Open its hood rise the prop rod. Place the prop in position to keep your truck's hood open. Wear your protective eye wear before continuing to the next step.

Use the wrench to loosen as well as remove the bolts which secure your converter in position. Place the bolts in a secure area until you want them again. You can now remove your catalytic converter from the exhaust system.

Inspect the converter to check for any damages. Then shake the converter and hear if there are any noises. In case of any damage, remove it and dispose it of before replacing it with a new one.

Also, if the converter has completely melted off and clogged the entire system, you have to change the whole system. The police can fine you if they find out that your exhaust is not working properly.

The coveter may consist of filth that was sent out by the bad fuel injection. Faulty fuel can clog the converter. You can as well heat up the exhaust by revving and ensuring the filth inside the converter has been pushed out or melted out.

Use a clean towel to wipe off the residue from the face of the catalytic converter. You can as well use a power washer to wash out debris, ensuring you get into the outlet and inlet pipes. If the converter is still dirty, soak it in the mixture of degreaser and hot water.

Step 5: Allowing the Converter to Dry

Give the catalytic converter plenty time to completely dry before you take it back to the exhaust system as well as return and fix the blots into place. 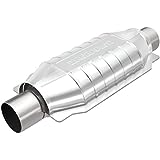 These article provides you with all the methods that you may use to get rid of the clogged catalytic converter. However, the best method is by taking your track to an expert.

Best Leather Conditioner to Restore Shine in Your Seats!

Best All Terrain Tires That Work Amazingly in All Seasons!

How To Clean An O2 Sensor In Easy And Simple Steps

How To Adjust The Shift Linkage On An Automatic Transmission